By 1840 Chesterfield was a thriving market town – about to embrace change in a big way. Local industries were many and varied ranging from pottery, lace and hosiery to casting, ironwork and pottery – but the predominant, and ever expanding, industry was mining – and pits, large and small, were everywhere.

In the mid 1800s there were many pits in the Chesterfield area mining  ironstone, clay and coal – and untold more in the North East Derbyshire area.

Goods were moved by cart and boats on the roads and canals of the North Midlands to all the major cities, to London and the ports on the coast. But there were many reasons why this was not ideal – quantities by horse-drawn carts were limited as was the speed of delivery by canal.

As mining got more mechanised and mine owners got more ambitious, the size of some collieries grew massively and the new industry, railways, grew to answer these needs.

Mining and the new railways were a match made in industrial heaven.

In George Stephenson’s office, in 1835, Frederick Swanwick prepared the plans for House of Lord’s committee on the North Midland Railway Bill.  The Bill was passed in 1836 and Stephenson charged Swanwick with the detailed supervision of the construction of the line.

This map of 1840 shows the the new Midland Railway in the year it opened with the original Midland Station at the bottom of Corporation Street. It crossed Hasland Road by the fork with Derby Road, The seeds of the Horns Bridge area were sown.

From Wikipedia, the free encyclopedia

Horns Bridge is a small area on the southeastern edge of Chesterfield, Derbyshire, England which was remarkable at one time for its congested intersection of roads, rivers, footpaths and railways. 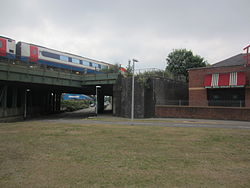 Horns Bridge was all the more striking because the congestion was three-dimensional:

The best place to start to gain an impression of the pre-1960 Horns Bridge is a map. An OS map from the 1940s gives a good idea,[1] with a range of other old Black and White maps fleshing out detail.[2] Maps are two-dimensional, the aerial photograph in “Gt Central North of Nottingham” gives an idea of scale, complexity and height,[3][4] which “The Changing Face of Chesterfield”[5] and the DVD[6] complement.

At ground level, both rivers are prone to flooding, which last happened on a serious scale in 2007. The Horns Bridge area and the inter-war floods are superbly shown in “The Changing Face of Chesterfield.”[7][8]

From Chesterfield town centre the Derby and Mansfield roads separate at Horns Bridge. Nowadays this happens at a large roundabout with several exits. In essence, the A617 Mansfield Road has been upgraded to a dual carriageway running South East to Junction 29 of the M1, incorporating in the process much of the trackbed of the GCR’s “Chesterfield Loop.” South of Horns Bridge the A61 Derby Road[9] is less changed, it is still a traditional two lane road. North of Horns Bridge, however, it has been dualled and re-routed to follow the alignment of the GCR Chesterfield Loop through the town, including opening out the former GCR tunnel.

Travelling southwards from Sheffield Victoria, the GCR’s double-track Chesterfield Loop branched West off the GCR’s Main Line at Staveley and rejoined it at Heath. Its station in Chesterfield was Chesterfield Central, situated North of the Town Centre. The station closed on 5 March 1963. Tracks South of the station to Grassmoor[10] and Heath[11] were lifted in the Winter of 1963/4.

South from Chesterfield Central[12][11] the line went immediately into Chesterfield Tunnel, from which it emerged a few hundred yards North of Horns Bridge. It then ran under the Brampton Branch, under a footbridge, under the Midland line, under another footbridge, under the LD&ECR line, over its junction with Hyde’s Sidings and finally into open country. This plethora of activity was crammed into a few hundred yards at Horns Bridge.

Hyde’s Sidings were laid by the GCR off the Loop and served factories to the East of the Midland line at the bottom of Hady Hill. The exit from the sidings onto the loop was protected by a gate, which was a source of mystery to lay observers.[17]

At the middle level was the first railway into Chesterfield, the MR’s main line from Sheffield Midland to London St Pancras, now widely known as the Midland Main Line. Chesterfield Midland was (and still is) North of the town centre, to the East of Chesterfield Central. At Horns Bridge its four tracks crossed the Mansfield Road immediately East of the junction with Derby Road. The same general layout exists today, though the road junction is now a large roundabout, as described above. The western pair of tracks were used by all passenger trains[18] and some goods trains. The eastern pair were only used by goods trains. Nowadays some passenger services also use the eastern tracks, so healthy is the level of passenger traffic on the line, which has been chosen for electrification in the next few years.

The MR’s Brampton Branch turned West off the main line between the Midland station and Horns Bridge.[19] It was single track and never a passenger railway. It was normally worked by an LMS “Jinty” tank. A curious survivor is a “bridge to nowhere” built to serve the Brampton Branch when the major reconstruction of the roads and buildings in the Horns Bridge area took place in the 1980s and 1990s. All trace of the branch West of that bridge has been erased.

At high level was the most dramatic feature at Horns Bridge – the LD&ECR’s main line which strode across all the features described above on a major viaduct. This structure consisted of seven brick arches and four girder spans, 63 feet high, flanked by substantial embankments in both directions.[20][21][22][23] The line ran from Chesterfield Market Place to Lincoln Central. Horns Bridge was reputed to be one of only two places in the world where three railways crossed at one spot at three levels, the other being in the USA. Strictly, the lines didn’t cross at exactly one spot, but that would be to split hairs. Passenger services from Market Place station ended on 3rd Dec 1951, with total closure coming in March 1957. Tracks were lifted but the embankment and viaduct at Horns Bridge remained intact until 1960, when the metal girder spans were removed.[24] The brick uprights and arches remained in place like Megaliths[25][26][10][11][27] until 1985 when they and the embankment to the West were swept away for the road alterations mentioned above.

‘The design celebrates Chesterfield’s strong industrial heritage, whilst also looking forward, towards the town’s future growth and development. A large Weathering Steel, ‘wheel’ or ‘cog’ appears to grow out of the landscape, symbolising industry, the spokes twist upwards at the centre to form an opening flower – representing the town’s growth and future, which is yet to unfold. The sculpture stands approximately 8 m tall and is 8 m wide. The design of the ‘flower’ is influenced by the flower of the Pomegranate Tree, which features on the towns coat of arms. The eight petals relate to the eight twisting facets of the town’s famous spire and also represent eight community areas that make up Chesterfield, eight sculptural dry stone walls will radiate out from the artwork, blending the sculpture with the landscape. The inside of the opening ‘flower petals’ have a contrasting satin polished, stainless steel finish, bringing brightness and ‘life’ to the inside of the opening artwork. In the centre, a cluster of ‘growing’ anther (pollen) reach upwards, these are also stainless steel. Lighting beneath and within the structure gives a different, night time effect of the sculpture. The sculpture was manufactured by Chris Brammall Ltd.’ http://www.melaniejacksondesign.com/#!growth-chesterfield/clrn